Bread-making results: the jury considers the merits of squatty loaves 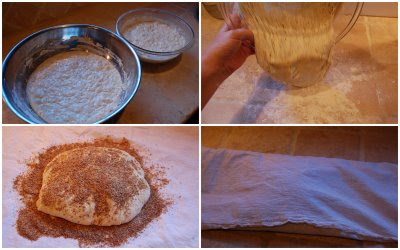 Here are the results of my first two attempts at no-knead breadmaking.

Ken LOVED 'em because they were chewy and squat which reminded him of the bread he ate everyday while living in Greece and Cyprus. He urged me not to change a thing.

I thought the taste and texture were fab, but I was hoping for a taller loaf, like Jane's. What did I miss? Did I not knead it quite enough between the two risings? I am using regular yeast; is that the same as instant yeast (I think it is).

My first two loaves were baked at 500 degrees per the NY Times recipe, but they came out way too dark. The third was done at 450 degrees per Melody Johnson's variation, and I was happier with that crust.

Today, I am trying Jane's Almost No-Knead Bread recipe from Cooks Illustrated. After just poking around a bit more, I found this recipe which produces a loaf that came out looking squat just like mine. That makes me feel a bit more on target - haha!